You are here: Home1 / reporting

It is not only sex that sells, it appears rape culture also sells, and it sells Coca Cola.

Only 30% of 2011 Rape Crisis Centre clients had reported the crime to the Gardaí. Ultimately, this figure should be recognised for what it is, a failure. The majority of survivors of sexual violence crimes choose not to seek justice and reporting one of the most serious violent crimes on our statute books is the exception, not the norm.

Yet 30% suggests a vast improvement. While the figures are not directly comparable, only a decade ago the national prevalence study (the SAVI report) found that only 10% of all survivors were reporting the crimes to the formal authorities. 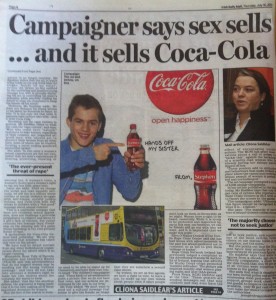 What has and is changing are our laws, formal policy and guidance, particularly concerning child protection, at the same time the RCNI and our member Rape Crisis Centres have been working closely with statutory agencies, the Gardaí in particular, transforming the range of supports, expertise, communications and responses available to ensure the least added trauma to a survivor engaging with the system.

Yet still only 30% of survivors make the choice to engage with the authorities. While there are many detailed reasons why each survivor makes the personal choice that is right for them in their own circumstances, one overwhelming aspect weighing heavily on every survivor’s decision, is culture.

Victims assess that they, the victim, will be held accountable for the upset caused to loved ones by the crime. Survivors will often assume the responsibility of protecting others from the harm caused by the rapist, that responsibility will often cost them their chance at justice and perhaps even support. These victims will assess that cost as the lesser of two evils. That is rape culture.

Those assessments are made by a survivor because they have spent a lifetime learning the rules. These rules are based on a simple truism which states that women and men are sexually unequal with men having higher and at times almost uncontrollable (and always heterosexual) sex drives.

The rules therefore state that given women’s bodies tempt men; a good woman should take it upon herself to protect herself, and indeed men, from the temptation she presents to men. Men who resist their ‘natural’ instincts to take women regardless of their consent are good men and furthermore should act to protect their women from all other men, none of whom can be trusted, forming a never-ending gendered protection racket.

In this story a woman’s sexual experiences are not her own rather they are men’s experiences of desiring, protecting, resisting or abusing her. A woman’s voice, a woman’s choice and a woman’s right to say YES has little space here. Put in these stark terms it sound preposterous (probably because it is) but this makes it no less real. 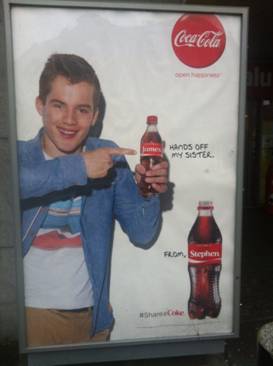 The messages reminding us of these rules are everywhere in the fabric of our culture sometimes in the most innocent of places. Witness one of the latest Coca cola ads where the viewer is invited to feel uplifted by the endearing and positive young teenage boy who is proudly declaring his act of controlling his sister’s sexuality while playfully chiding his friend to obey his command to keep his hands off his sister. He does not demand his friend listens to his sister, he demands he listen to him. It is not only sex that sells, it appears rape culture also sells, and it sells Coca Cola.

For victims of sexual violence crimes the impact of this story of unequal genders and sexuality and its rules often means that they blame themselves, choose silence and experience added trauma. 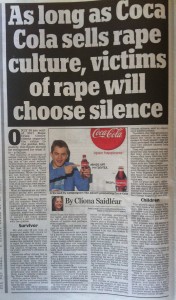 The boy being raped will accept that he should be enjoying this, even though he doesn’t, because he has been exposed to pornography since he was 9 that told him real men always enjoy sex. The 15 year old girl will know that because she was drinking underage when she was raped she has no one to blame but herself because she had been warned all her life that bad things happened to bad girls. The middle aged woman, who took a lift home with a man she was on a date with, will know that if she had wanted to call what happened next ‘rape’, she should not have let him pay for dinner and give her a lift home. The woman who fell asleep in a bed at a party and woke to find someone she had spoken to earlier that night raping her, will know they both know she will not report him because she has already been set up by a list of ‘stay safe’ rules, many of which they both know she has already broken that night. Like the majority of victims of sexual violence crimes they will not report.

Until we change the script and take equality seriously, we will live in a culture where victims of sexual violence struggle with self-blame, society judges victims and Coca Cola sells soft drinks to children with a ‘feel good’ message about sexual violence that does not condemn sexual aggression, does not challenge a potential perpetrator to respect and listen to a girl’s lack of consent, but rather cements two teenage boys’ friendship on the winning side of a game whose backdrop is the ever present threat of rape.

This article first appeared in the Daily Mail in July 2013.