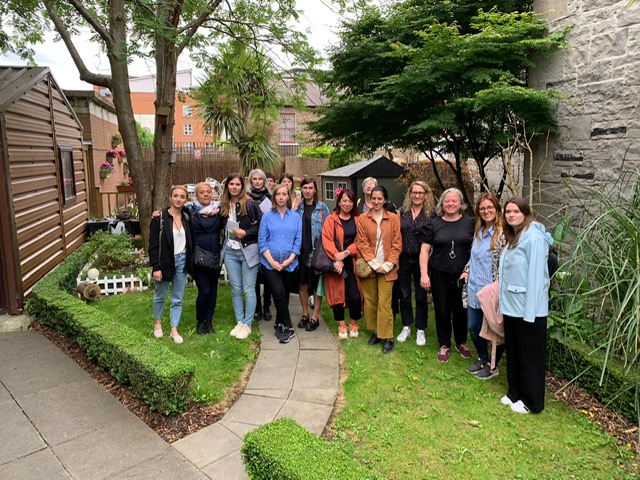 In the first week of July RCNI was delighted to welcome Maja Mamula, Kristina Mihaljević, Jelena Čaušević, Andrea Domitrović and Svea Kučinić of Women’s Room Croatia (Zenska Soba) for a fleeting three-day visit to Ireland. The purpose of the visit was to give the delegation an overview of the services available in Ireland to survivors of sexual violence. Women’s Room is a Croatian feminist, non-profit, civil society organisation established in 2002. It provides direct services to victims of sexual violence including survivors of sexual violence as weapon of war and aims for the prevention and combating of all sexual violence as well as promotion and protection of sexual rights. The visit was designed to be an exchange of expertise, experience and opinion and to forge deeper connections between members of Ireland’s sexual violence sector and their sister organisations in Central and Eastern Europe. 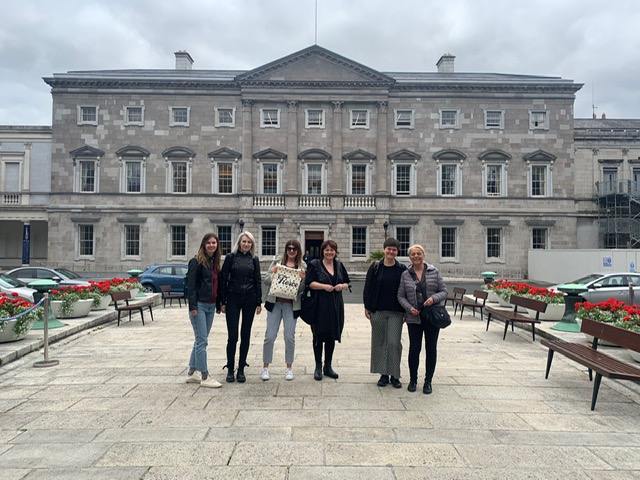 On Monday 4 July  Deputy Jennifer Carroll MacNeill welcomed our delegates to Leinster House accompanied by Lisa Marmion of Safe Ireland and Cliona Saidlear of Rape Crisis Network Ireland. There they discussed their respective country’s response to male violence against women, reflected on the Croatian experience of widespread rape and sexual violence visited upon women during the Bosnian War. In particular we focused on the prevention work our partners in Croatia are doing in schools programmes and our own curriculum development here in Ireland. We also shared the different and similar challenges faced in both jurisdictions in resistances to providing access to all children to good sex and sexual violence prevention education. 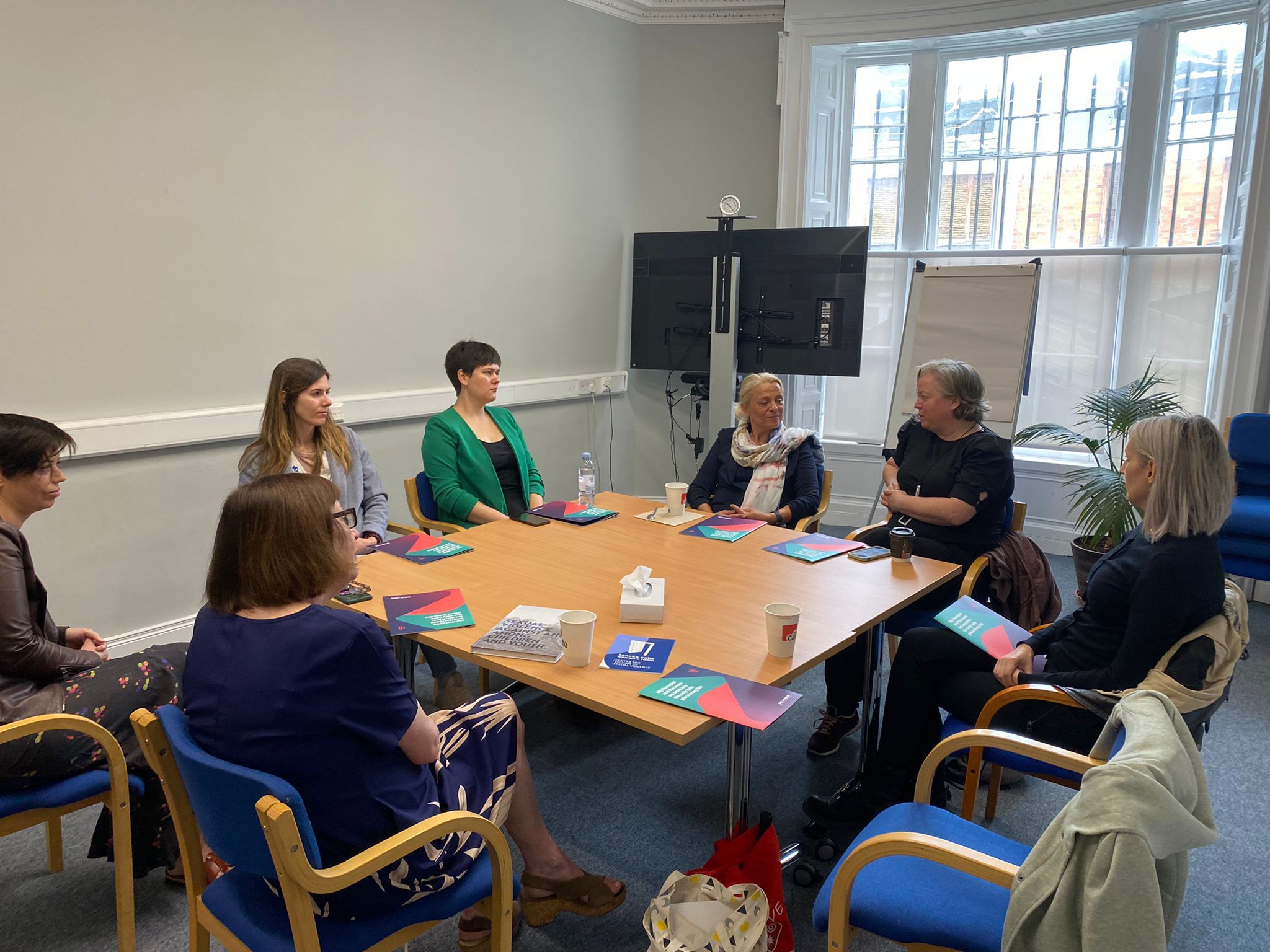 Our delegates were kindly hosted by One in Four on Tuesday when Maeve Lewis gave an overview of the organisation’s vital work in providing professional counselling to adult survivors of childhood sexual abuse, its sex-offender intervention programme and its vision of an Irish society where children are safe from the threat of sexual harm.  Maeve reflecting also on her own time working in Croatia following the war. This was followed by a visit to the Sexual Assault Trauma Unit at the Rotunda Hospital facilitated by Clinical Nurse lead Noelle Farrell.

Tuesday afternoon saw a joint session led by Clíona Saidléar of RCNI during which we were joined by representatives of Kvinna till Kvinna and its partner organisations from Bosnia and Herzegovina. Kvinna till Kvinna was founded in 1993, when, as a reaction to mass rape in the wars in former Yugoslavia, Swedish women started raising money to support local women’s rights organisations in Bosnia and Herzegovina.  It is estimated that during the war at least 20,000 women fell victim to rapes and other forms of sexual violence. More than twenty years have passed without any redress for most of them and with little access to medical, psychological and financial assistance. Most perpetrators walk free. The discussion centred on best practice, legacy, structural and cultural barriers to realising and implementing the specialist rape crisis response to survivors of sexual violence as required under the Istanbul Convention.

The Bosnian women’s movement works to promote peace, dialogue and dealing with the past beyond division lines. It calls for accountability for war crimes and ending violence against women. As the country embarks on constitutional reform, women human rights defenders have united to push for the inclusion of gender perspective into the Constitution. But opposition is fierce: with ethno-nationalist rhetoric on the rise, women’s rights activists are regularly threatened as they challenge the nationalist political agenda of division. The following organisations were represented at the session.

Center for Women’s Rights (Zenica): Center for Women’s Rights was established in 1996 with the aim to provide legal assistance to women, both face to face and online. They directly assist women survivors/victims of gender-based violence in exercising their rights and access to justice, and work on promoting the rights of victims to fair and equal protection by using evidence-based advocacy. They regularly monitor the criminal justice system response by directly monitoring GBV cases at courts throughout FBiH.

United Women (Banja Luka): United Women Banja Luka has worked against violence against women since 1996 with supporting victims/survivors as well as advocating for positive changes in laws, policies and implementation.  In 2007, United Women opened a shelter for victims of domestic violence outside Banja Luka. They have an SOS hotline and provide legal aid to women victims. With the support of Kvinna till Kvinna, they advocate for a fair and equal protection and access to justice for women and child victims of violence and monitor the institutional response to gender-based violence.

Trial International (Track Impunity Always): Trial is a renowned Swiss organisation fighting impunity for war crimes and supporting victims and survivors in their quest for justice. It conducts programs in several countries, including Bosnia and Herzegovina (BiH), where Trial’s office operates independently. Trial’s work in BiH is, among others, focused at improving the status of survivors of war sexual violence and countering the stigma attached to victims.

On Wednesday the group visited Ruhama where Jennifer Roche gave a tour of their premises and talked about the work and ethos of supporting women and others being exploited in the sex industry. Lest we left our partners too positive an impression of where Ireland is today we then crossed the river for a viewing of the harrowing Alison Lowry exhibition Addressing Our Hidden Truths at the National Museum of Ireland at Collins Barrack. This exhibition presents a profound piece of commentary on the Tuam Mother and Baby Home revelations and audio testimony including poetry and song from those who experienced the industrial school system and Magdalene Laundries. Dr Sinead Ring from Maynooth University very kindly joined us and gave an overview of the role these institutions have played in our nation formation and right up to today.

The final stop was a tour of the premises of the Divisional Protective Services Unit (DPSU) in Fitzgibbon Street led by inspector Conor Ó’Braonáin. The DPSU was established in 2017 to deal specifically with sexual crime, human trafficking, child abuse and domestic abuse and is now based in a newly opened facility, in a carefully restored building that includes Ireland’s first Crime Victim Support Suite. The Suite includes several specially designed spaces to allow Gardaí to cater for the varied and sometimes complex needs of victims in a compassionate and dignified way. 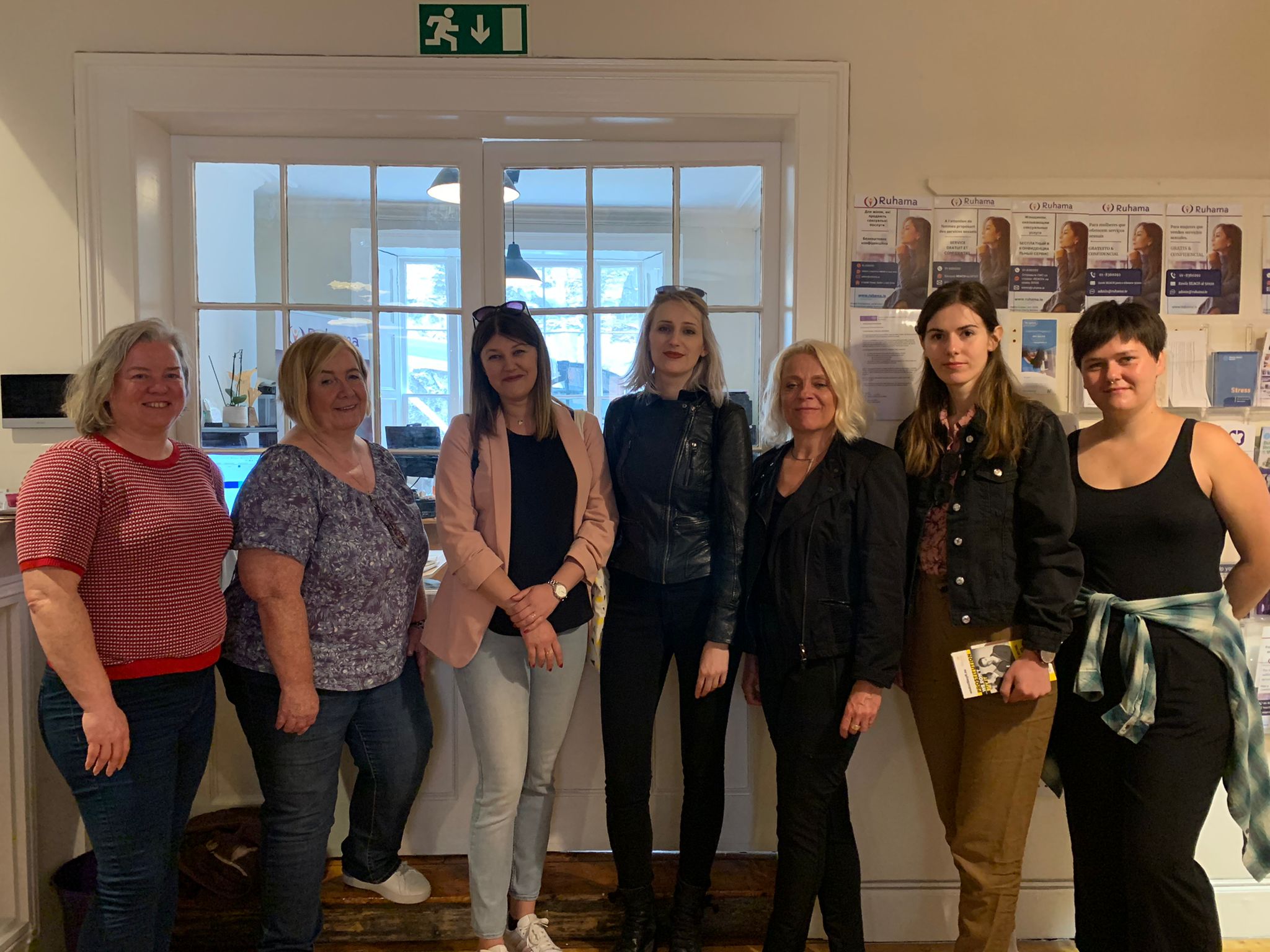 It was a pleasure to host a group of women so dedicated to tackling the cause and the aftermath of sexual violence and an honour to learn further of their experiences and perceptions. The trip was of great benefit to both RCNI and, we hope, to our visitors and helped deepen our partnership. Male violence against women knows no boundaries but misogyny takes many forms and manifests differently according to a country’s history, its prejudices and its particular socio-cultural climate and context. We hope that this visit will be the first of many opportunities where women can share their wisdom and understanding and work together to face the challenge of sexual violence and exploitation against women and children.